My Bride is a dangerous woman.

Last year, I tried to pick a theme – let’s read only pocket paperback-sized books! – and I got about half the year before I read some mass market paperbacks… I don’t know if I’m made for year-long themes.

But this year, she’s still using a theme. This time her theme is terrifying: She’s having me pick every book she reads.

I have such power.

Do you realize what this means? For those of you who are readers, can you imagine putting yourself at the mercy of another for an entire year?

I could make her read Harlequin Romances all year. (She hates those!) I could just hand her the worst comics in my collection. I could torture her.

Although that’s probably a bad idea. She does make most of the food around here.

So far I’ve chosen an old favorite of mine I knew she’d speed through, The House with a Clock in its Walls. Then I picked a book by her favorite author that she hadn’t red yet – The Diamond Throne by David Eddings. I’ve got some ideas of where to go next.

If you’re close to someone, I dare you do this. Ask them to select books for you. See what happens.

But don’t ask me to do it. I have a hard enough time picking books for myself!

And speaking of my Bride, here’s some more of what she read this year!

So – I read the entire Giver quartet this year. The Giver was reviewed over in my “best of” list. This is the rest of the set. Now, I don’t think there ever needed to be more after The Giver. I don’t think the rest are as great as The Giver. But they are worth reading. The characters cross over between books, so reading them together definitely helped me get more out of them, also. If you liked the ambiguous ending of The Giver, you may want to stay away from these, though, as you do definitively find out what happened to Jonas and Gabe. Heads up.

Gathering Blue, Messenger, and Son all involve that world’s strange brand of magic in some way – some supernatural, extra-sensory capability the characters seem to have. And it’s interesting to see what Lowry does with those and how they work. In Gathering Blue, it’s tied to working with fabrics. In Messenger, it’s tied to healing. And in Son, it’s a force of evil actually.

I’m sorry this isn’t a more thorough review, but spoilers abound. So, there you go.

We adopt libraries. Like, school libraries in need of a little love. This year we were helping build a “family resource center” library, and this is a book we grabbed for that. I previewed it just to make sure it wasn’t too dated (and therefore unusable). Surprisingly, it wasn’t too bad! The main character was certainly less well-versed in computer use than today’s kids sometimes are. He was a slow typist and Dad wouldn’t get him a computer for at home. (Hats off to you, fictional Dad. Kids don’t neeeeeed all that technology they think they do.)

Essentially it’s a story of two unlikely people who become pen pals (email pals) and are better people because of it. A young boy gets in trouble, and as part of his “community service” type punishment he was assigned to be email pals with an elderly woman in a nursing home. Not necessarily one I feel the need to return to, but a fine little story.

We actually listened to this one as an audio book while on a road trip. Apparently I missed it in grade school (probably because it’s aimed at boys. Shrug.) But it’s a Newbery book, so you know you’re in for a good read.

Brian is flying to visit his dad. The pilot has a heart attack, and Brian ends up stranded, alone, in the middle of nowhere Canada. With little other than his hatchet, he has to figure out how to build a shelter, keep a fire going, catch fish, and so on.

I can totally see how teachers could build a unit around this one. The whole pilot having a heart-attack scene was a little rough, but I really enjoyed the rest of it.

Out of My Mind by Sharon M. Draper

I want to say this one was recommended to me by a friend. So, thank you to the person who recommended this one. Melody is a genius. She has an awesome memory, has all sorts of ideas….and has been listening to her teachers sing the alphabet song every day since forever. You see, Melody is confined to her wheelchair, unable to walk, unable to control her arms all the time, unable to speak. And some people think that means she’s stupid. But now, at eleven years old, she’s finding her voice. With an assistive device, Melody is able to finally share her thoughts and show how much she knows and what she’s capable of. She even tries out for the quiz team. ….But still some of her classmates can’t see past her disability.

This was a good read. I recommend it, too.

Flora and Ulysses by Kate DiCamillo

The story of a girl and a squirrel. I….I really wanted to like this one. But if I’m being honest, I don’t remember much about it. I remember someone was trying to get rid of Ulysses (the squirrel). I remember said squirrel typing out messages for Flora to find. ….But I really can’t say much else about it. Left a big impression on me, obviously.

The Imaginary by A.F. Harrold (Illustrated by Emily Gravett)

Rudger and Amanda are best friends. They love going on great adventures in the backyard, pretending they are in a spaceship or a hot air balloon or an igloo. Sometimes the cat plays along. Even Amanda’s mom seems to enjoy their games, even though she can’t see Rudger. You see, Rudger is Amanda’s imaginary friend.

And if that’s all the story was, it would be a fine – if simple – story.

But that’s not all the story is. That’s just the setup.

The real trouble starts when you realize Amanda’s not the main character in this story. Rudger is. What happens to an imaginary friend when their friend is in a horrible accident? (They start fading.) Where do they go with no one to keep imagining them? (Well, the library of course, if you can get there fast enough.)

Then you add in Mr. Bunting. He’s kind of like the boogeyman; no one believes he exists. But Rudger has seen him, and he’s terrifying. He devours imaginaries. Somehow Rudger has to keep from being forgotten, find Amanda, and escape Mr. Bunting.

There was one bit at the end that you could see coming. But there were so many other unique and engaging ideas in this story – more than enough to make up for it. 3 parts imaginary, daydream fun – 1 part nightmare fuel. 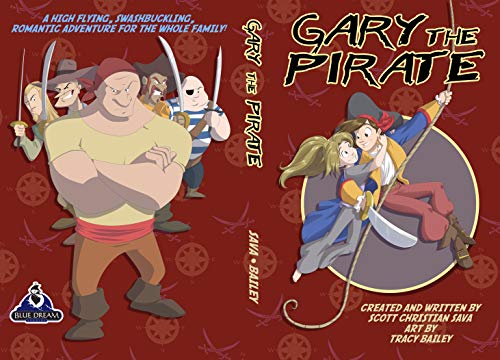 Gary the Pirate by Scott Christian Sava and Tracy Bailey

Another graphic novel for the year. This one is a quick little adventure story with a bit of romance thrown in. A young girl gets caught up in an adventure with some pirates – and one rather inept young pirate in particular, Gary. That’s all you really need to know.

Everybody knows that one kid in class. The one who’s always up to something. Trying to distract the teacher and get out of homework assignments. Thinking up some crazy plan to have everyone wear matching t-shirts next Thursday. Just harmless enough that they never get in toooo much trouble.

Well, that’s Nick. Everybody loves Nick. But this year, his teacher, Mrs. Granger is on to him. Somehow, instead of getting out of his homework, he ends up with extra. He has to do a report about…the dictionary. The dictionary!? How boring can you get? Turns out, though, that learning about words is great inspiration for his next plan.

He starts calling his pen a “frindle.” He totally just made up that word. But it’s fun, and all his classmates agree. Soon everyone in school is calling it a frindle. And Mrs. Granger is issuing detentions left and right trying to stop them.

I especially enjoyed the ending of this one. Go read it.

Thanks for stopping by — see you next week!