So, here I am, reading Planet of the Apes by Pierre Boulle, a novel about some astronauts visiting another planet on the far side of the galaxy. While there, they encounter humans that are animalistic. They wear no clothing, just as animals here wear no clothing. OK, so far pretty logical.

The main characters meet a young woman as their first encounter of this savage human species. And yes, she’s naked. Boulle brilliantly describes her motions as completely animal-like. The scene is quite arresting. And as Boulle further describes this character, he makes sure to tell us that she walks with her “breasts outthrust.”

Look, I get that plenty of books and other media include sex appeal as a selling point, but this book (at least in my copy) was not marketed for sex appeal, and up until now it had been a fairly straightforward science fiction story. There had been no sex appeal in the least, and certainly no descriptions of the male characters that were even somewhat sexy.

And then we get to meet a female character, and she’s walking around with her “breasts outthrust.”

It’s a needless detail that just seems to come from out of nowhere. Why did we need to know this about her? What does it add to her character? Did Boulle decide that the readers needed a little titillation (pun somewhat intended)?

It certainly added nothing to the character we didn’t already know. Boulle’s descriptions of her movements being animalistic already told us quite a bit about her, and we’d already been informed she was naked. We really didn’t need to know anything about her breasts for the story.

But here we are, breasts outthrust.

I’m talking about descriptions that don’t advance a character nor a plot, but are included anyway. I’m thinking of examples like Boulle’s odd choice, or this cover: 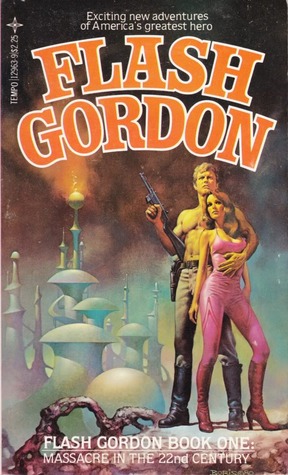 I’ve read the book (fairly recently!). Dale Arden doesn’t appear in anything resembling that outfit. And those heels? Why would anyone ever wear that? (No, I don’t need pictures or real answers, thank you.)

You know why she’s wearing that on the cover?

To get you to buy it so you can read your sexy times.

And this bugs me so much.

First, it denigrates women. I know this is a shock, but did you know that women aren’t just beings that exist so that breasts have something to hang onto?

But anytime I come across a description like Boulle’s, it makes me wonder if maybe we can get a descrption of a woman that doesn’t talk about what’s on her chest.

Now, if the size of her chest is a plot point, or how she presents herself tells us about her character, sure. Include it. Go for it, I guess.

But let’s be honest: How often is that the case?

Nope. Those descriptions most of the time are just there to give a little bit of sexy. They make it so, even if this particular woman happens to be more than breasts in the story, her breasts are something that apparently we need to know about.

And we don’t need to know about them.

Whoa! Women are people?! With personalities? Who knew!

Second, it tears down some of my favorite genres. Sexy descriptions just make me feel embarrassed. That Flash Gordon book? I didn’t carry it with me anywhere when I was reading it. I was ashamed of the cover! (To be fair, the book itself wasn’t that great either.)

And third: It throws me out of the story. In Boulle’s case, he wrote an amazing novel. If you only know the story from the movies, do yourself a favor and read the book as well. It’s not terribly long, but the twist ending is incredibly well-played, and the sense of dread conveyed when you find out why the apes have taken over is some of the most intense writing I’ve come across.

(Incidentally, the original movie ain’t terrible by any means. This is one of those cases where both the book and the adaptation, though they vary widely, are both pretty darn good.)

But what am I writing about today? Not his tight plotting or character work, but “breasts outthrust.”

Let me give you some advice:

Write plot and characters (not necessarily in that order). If someone is sexy as part of their character, yes, describe that. But let plot and character carry what you describe. If you feel the need to describe a character’s breasts and it’s not essential to the plot… just don’t, all right?

We really don’t need them outthrust into the story.

One thought on “We’re outthrusting what now?”